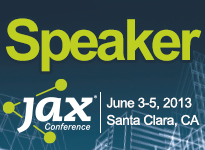 This week I attended the JAXConf 2013 conference for a third year in a row. This year JAXConf was held in Santa Clara, the heart of silicon valley. The conference once again had a fantastic line up of speakers, with well recognized industry leaders speaking on a variety of current and exciting topics. Unfortunately, JAX continued this year to be one of the best kept secrets of the tech industry on the West coast, with attendance not being as strong as many would have liked.

I attended a number of useful sessions covering topics from: testing web applications, the latest javascript frameworks, and what’s new in Java EE 7. There was one particularly interesting session in which it was "Tim Berglund vs. the audience" with his seemingly radical ideas on the current state of agile development - very entertaining (and informative!)

My own session went well. I took a opportunity to talk in stealth mode about the work we are doing in RichFaces 5 during my session on "poly-framework" web applications with Java EE. While I possibly spent too much time talking about Bootstrap, I think I got the point across about the power of Less CSS and CDI, with lots of plugs for the Errai and Aerogear projects. The session was recorded, I’ll update this post with a link to the video once it’s available.

A real highlight of the trip was the chance to meet up with RichFaces community member Nick Graves and talk all-things RichFaces 5. It’s always great to meet someone who’s excited about the work we’ve been doing on RichFaces Bootstrap. And don’t worry Nick, those chart components are coming soon!

It was great to attend another Java Posse live podcast recording. It made me realize that it’s been a couple of years since I last listened to the Java Posse podcast - ever since I stopped commuting. I enjoyed listening to their conversation quite a bit, particularly "@Carl Quinn’s" discussion of home automation with the Arduino chips in the "hobby projects" portion of the podcast - definitely something I’d like to make some time to fiddle around with.

There was plenty of excitement at the OpenShift booth (great to see Red Hat sponsoring the JAX event yet again!). It was great to meet Ryan Jarvinen Steve Little and help spread some OpenShift love!

I had a fun time visiting with David Blevins (of Tom EE fame) and his wife Amelia. As always the JAX crew themselves were great to hang out with - such gracious event hosts they are!

I look forward to the opportunity to speak again at JAXConf next year. I hope they can find the right location to maximize attendance, and keep this conference going for many years!

Brian Leathem is a Principal Software Engineer at Red Hat as the technical architect for the PatternFly project, in the User Experience and Design team. Working as a developer in a UXD team, Brian strives to bridge the world of designers and developers by adapting his engineering experiences to help solve modern user experience and design challenges.

© 2018 Experiences of a developer . Powered by Hugo